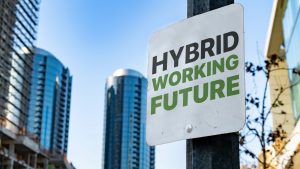 Even if it looks in doubt again this week, there really will eventually be some sort of ongoing return to the workplace! So, are there any keys to a successful reboot? Yes, and being a ‘resilient’ could describe some features you as an executive can take into your workplace.

I’ve just read Return as a muscle: How lessons from COVID-19 can shape a robust operating model for hybrid and beyond, authored by four partners at McKinsey.

It’s very consistent with some of our own recent work at Atwork – and the recommendations are really consistent with what we’ve recommended to our incredibly dedicated client organisation for the project, advising them in setting their own best strategies for the new world of work.

A snapshot of the four keys to long term success is that it’s time to invest heavily now in:

To return, or not to return…

Most organisations and many working people do now want some form of return to the office, even though it will not be the office of the times before Covid-19.

At the same time, while remote working has had its difficulties (some of them being felt more deeply the longer it goes on) many employees at all organisational levels have enjoyed the flexibility and convenience that it’s introduced to their lives, and don’t want to entirely let that go. And it’s become clear that some types of work, some of the time, can be done better out of the traditional workplace, and particularly out of some of the workplaces we’ve ended up as a result of trends around extreme open-office approaches and packing people in like sardines.

So the pressure is on now to re-invent the workplace. An emerging position on the reboot now in most organisations is that they will embrace (enthusiastically or not!) some form of hybrid approach. Many organisations are expecting staff to be back in the office somewhere around 3 or 4 days a week. And yes, this reference to ‘office’ is telling; there are many workplaces (manufacturing, agriculture, hospitality, health services etc) where the site of much of the work is still inherently in the workplace.

Back in May 2020 the authors of Return as a muscle… had proposed that the return to the workplace would involve developing a new muscle (or capability) rather than a plan with a predictable timeline. The need for this organisational ‘muscle’ is stronger now than ever before, with the frequent re-activating of lockdowns and associated restrictions to doing business.

So now, they’ve reported on new research conducted with more than 500 senior executives across eight industries.

Their research found that during the pandemic, about 50% of the companies recorded increased performance, while the rest saw either ‘no change’, or decreases. The authors describe the companies that improved performance as “the Organisational Resilients” and those that didn’t “the Non-Resilients.”

Amongst the findings were that:

The following is their outline of the lessons and key actions that will enhance any organisation’s “return from remote” (or reboot as I’m calling it).

Emergency flexing is not the same as sustainable agility

Before the pandemic, many leading organisations had already started executing a move toward more agile, people-focused operating models.

During the pandemic, the Organisational Resilients actually “doubled down” on actions consistent with this move.

Of course during the pandemic, more organisations turned to more agile ways of working out of necessity—they had to get nimble quickly to withstand the unexpected challenges. The incredible ability to have entire teams working from home almost immediately involved an unprecedented shift. We’ve discussed this before in referring to our VUCA world (VUCA: Volatility, Uncertainty, Complexity & Ambiguity). If our world was already subject to VUCA, this was multiplied by the Covid pandemic.

But an emergency response is not a long-term strategy, and the capabilities that will help organisations sustain a new way of working long-term are different to those that enable survival during a crisis phase.

The following four key lessons identified in this research can inform the actions of organisations planning a successful and sustainable return from remote.

During the pandemic, business leaders made a huge effort to give the clearest guidance possible, whether laying out strategic imperatives or painstakingly breaking down problems they wanted teams to solve.

The authors note that this resonates with McKinsey research on decision-making, which has found that crafting clear goals and clarifying strategy was a “must do” to enable better and faster decisions further down delegation lines. It frequently fails because leaders often feel they need to intervene in and micromanage decisions, since when these get delegated down to what should be the appropriate level, the lower-level decision-makers often see the decision from the siloed perspective of their narrow, tactical individual accountabilities – and so they can’t make wise decisions that account for the impact on the whole business or other teams. This problem is linked to the fact that they don’t have sufficient clarity from leaders on broad enterprise goals and strategies, so while they might be capable of making good decisions, inevitably make bad ones. It should be a simple fix, though it’s part of a long-term approach to building a more mature organisation.

2. At Organisational Resilients, small, cross-silo teams focused on outcomes and were empowered to make decisions that drive impact.

During the pandemic, Organisational Resilients increased their reliance on networks of small, empowered, cross-silo teams by 61% (versus 29% for Non-Resilients).

Their teams focused specifically on outcomes, not process.

This trend is here to stay, and is a key element of the future of work. Strong organisations will:

The take-out here is that Delegation and Empowerment are more likely to lead to succeess when leaders set clear strategic direction and offer good coaching and meaningful recognition, rather than leaving people to their own devices (aka the laissez-faire approach).

Collaboration technologies were another standout feature:

Speedily working new collaboration technologies into operations is an essential element of any company’s success.

In summary, the authors believe, as do I, that these shifts will be as critical to the return from remote as the evidence shows they were during the pandemic.

It’s partly because we are not ‘returning’ to the old way of working; it’s a different world now, demanding a new way of working.

So, best wishes with your own reboot – you’re welcome to get in touch if you wish to discuss, or set up some strategies for your workplace.